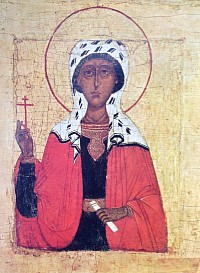 Paraskeva of Iasi, (in Romania),is also known as Parascheva of the Balkans, of Serbia, of Belgrade and the New. She was born around the beginning of the 11th Century and would, if she lived today, be seen as a teenage runaway.

A daughter to a wealthy high status Christian family living in Epivat (now in Turkey) by the Marmara coast, she was in church at the time she paid particular attention to the words “Whosoever will come after Me, let him deny himself and take up his cross, and follow me” and spent considerable hours thereafter reflecting on what they really meant.  She began giving away the expensive clothes, her parents had given her, to poor people.  Actions about which her parents weren't especially thrilled. They had worked hard for their lifestyle and couldn't afford for her to be giving it all up to strangers.  All efforts to encourage her to desist and refrain fell on deaf ears.  It would be easy to think that there were many arguments and raised voices over her decisions and in the end Paraskeva ran off to Constantinople and spent as much time as she could in prayer.

Her parents, meanwhile and quite reasonably, were even more upset about losing their (disobedient) daughter than they were about her giving away her possessions, and followed after her in 'hot pursuit' travelling from city to city trying to track her down.  Paraskeva, reckoning she could only elude them for so long before they caught up with her, moved on to Chalcedon and then again to Heraclea Pontica near the Black Sea.  There she lived an ascetic life and believed she saw visions, one of which instructed her to go to Jerusalem.

After some time in Jerusalem she joined a convent in the Jordanian desert before returning to Constantinople. By the time she was 25 she had moved to the village of Katikratia where she lived till she died at the age of 27.  Years later a monk dug up remains he believed to be hers, and via the church in which she last lived these were moved to Tirnovo, in Bulgaria, then to Belgrade, in Serbia, and finally to Constantinople. In 1641, they were given as a gift to the Prince of Moldavia, Vasile Lupu, in recognition of his support for the Ecumenical Patriarchy of Constantinople. These remains have been in Iasi ever since. She is venerated as the Protector of Iasi and all of Moldavia, and in the Balkans her memory is a major festival each year on October 14th. 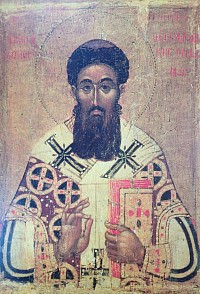 St Gregory had the good fortune to be born in Constantinople in 1296.  He had the better fortune that after his father, a courtier of Emperor Andronikos II Palaiologos (1282 - 1328), died while he was yet an infant, that Andronikos decided to play a key role in his upbringing and education.  In 1316, despite wishing that Gregory would devote his life to service in the government, Gregory took himself off to Athos to the Vatopedi monastery.  In time Gregory moved to St Athanasius monastery on Athos where he became a waiter and sang in the choir. Time passed and Gregory sought a more aesetic life, so joined a Skete, which is a group of monks within a monastery setting themselves apart from the main brotherhood where he taught a discipline of prayer called Hesychasm.

Hesychasts practice a method of contemplative prayer of praying with their head between their knees in the manner of Elijah, which seeks to block out the physical senses focusing inwardly on God.  This type of meditation is a strict interpretation of Matthew's gospel where Jesus is quoted as saying "go into your closet to pray".  Hesychasts use the Jesus Prayer to "Guard the Mind" with a purpose to devote themselves so totally to God to the exclusion of absolutely everything else.  This practice of Hesychasm has its roots in the Jewish mystical tradition of Merkabah, whose practitioners  invoked the Divine Name (Hashem) while rhythmically breathing.  Hesychams practitioners reciting the Jesus Prayer instead of Hashem.

Turkish invaders were a real threat at this time in the world history, and in 1326 Gregory and some others sought refuge in Thessaloniki, where he was ordained priest. Trying to balance his own spiritual needs with serving the spiritual needs of his parishioners, he founded a community of hermits in Veria.  Later he was made Abbot of the Esphigmenou monastery, but the monks rejected his aescetic style and in 1335 he was forced to resign.

After this Gregory concentrated on writing and opposing heresy.  Principal of heresies Gregory opposed was led by Barlaam, whose influence grew such that the dispute surrounding Hesychasm was brought before an Ecumenical Council in May 1341 in Constantinople. Barlaam was denounced as a heretic and Barlaam left for Calabria to join the Roman church.

Three years later Gregory fell foul of Patriarch John XIV , who had him imprisoned till Patriarch Isadore was enthroned whereupon he was released and consecrated Metropolitan of Thessaloniki.  Unfortunately he was not popular with his people and he didn't actually occupy the episcopal chair till 1350.  Four years later, on a ship travelling to Constantinople, he was captured by Turks who imprisoned and beat him.  They took him to the Ottoman court where he was treated well till his ransom was paid.  Gregory returned to Thessaloniki as Archbishop where he lived for the last three years of his life.  Gregory died November 14th 1359. 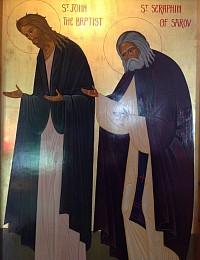 Ikons are 'windows into eternity' and so it is quite proper for two saints who lived almost two millennia apart to be represented together. St. John the Baptist really is too well known to need further description, besides he has already been described elsewhere in this gallery, so let us turn our attention to Seraphim.

Seraphim was born Prokhor Moshnin July 19th 1754, in Kursk.  As a ten year old he fell ill, had a vision of Mary, the Mother of God, telling him he would recover. Several days later a religious procession passed his house carrying a special ikon of Mary. Upon standing to watch it he made a rapid recovery. During the rest of his childhood he developed an interest in Christianity and found a liking in withdrawing from the family to pray. At 18 he entered the Sarov monastery.

He took the ascetic aspect of the monk's life with great seriousness, eating as little as would keep him alive. Taking to a forest to pray and live as a hermit, he again became seriously ill, needing three years to recover. He recorded that he again saw a vision of Mary and again she promised he would recover.

He took full vows in 1726, at the age of 27, taking the name Seraphim. After being ordained Deacon and then Priest, he withdrew again, in 1794, to the forest.  After a savage beating by thieves, who stole very little as he had very little to steal, he pleaded for mercy when they were eventually caught and brought to justice. The beating, however, was so brutal he spent the rest of his life hunched, needing a stick to help him walk.

His evident holiness drew thousands of people to him. He died 14th January 1833, and remains one of the most important and most loved saints of Russia. 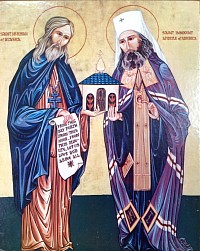 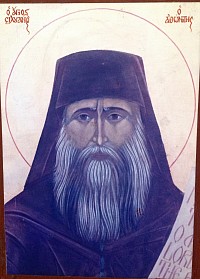 Born Simeon Ivanovich Antonov in 1866, he holds a rare position that he was caught by photography and his image is available.  Thus ikonic representations of him are fairly consistent. An ascetic he spent much of his life in prayer, he was seen by his contemporaries to be an elder. Thomas Merton described him as the "most authentic monk of the 20th Century".  One of his more memorable sayings was "Those who dislike and reject their fellow-man are impoverished in their being. They do not know the true God, who is all-embracing love". 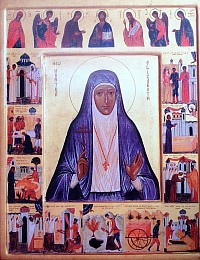 One of Queen Victoria's daughters was Princess Alice. She married Grand Duke Louis IV of Hesse and their second daughter was named Elizabeth. They also had another daughter, Alexandra Fyodorovna, and she was the last empress of Russia.

Diptheria has been largely eradicated now, but it was a highly contagious disease in 1878, spread by physical contact or inhaling the secretions of those already infected, and it infected much of the royal household killing not only one of Elizabeths' sisters, but her mother Princess Alice, also.  Fortunately Elizabeth was away and avoided the disease, but orphaned at 14 she was brought up partly by Queen Victoria but remained in contact with her remaining family in Russia, the Tsar Nikolas, Tsaritsa Alexandra and Grand Duchess Elizabeth.  Eventually she married Grand Duke Sergei of Russia in 1884, and together they adopted the orphaned Grand Duke Dmitri Pavlovich and his sister Grand Duchess Maria Pavlovna.

Elizabeth converted to Orthodoxy from Protestantism in 1891, and 14 years later she was widowed by a Communist bomb which assassinated her husband. She herself heard the bomb and she herself helped collect the scattered body parts from whence they had been blasted.

She decided to become a nun, and she sold and gave away her wealth and possessions and spent her remaining life working in Moscow in the refuge she had built to aid orphans and the poor. On July 18th 1918 Elizabeth, along with various others, were herded deep into a forest by the Bolsheviks, pushed into an abandoned mineshaft and were blown up by the grenades they threw in.  In 1992 she was declared a saint. 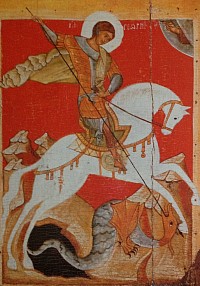 As far as possible, this gallery of saints and events is arranged chronologically. The reason why this is at the end, is that all the other people and events represented here actually lived and took place. St George, on the other hand, is probably fable.

Tradition has it that he was aGreek who became an officer in the Roman army, George's father was Gerondios from Cappadoccia Asia Minor, and his mother was Polychronia from the city Lyda.  (Lyda was a Greek city from the times of the conquest of Alexander the Great in 333 BC, and is now in Israel.) George became an officer in the Roman army in the Guard of Diocletian in and around Nicomedia, in modern Turkey.  He is venerated as a Christian martyr, having allegedly been tortured and decapitated in the early 4C Christian purges.  In hagiography (the word Orthodoxy uses to describe the biography of saints) George is immortalised in the tale of St George and the dragon and his feast is celebrated on 23 April. 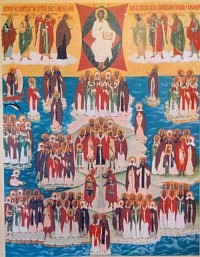 Whilst the Orthodox Church is a global community, it is entirely right and fitting that the local component of each community is respected. To this end we have in our church an ikon of the Saints of Gt.Britain and Ireland.

There are too many to name individually, but this ikon serves to remind us how significant has been the contribution to Christianity of people of what we Orthodox Christians call "these northern isles."