History of the Orthodox Church 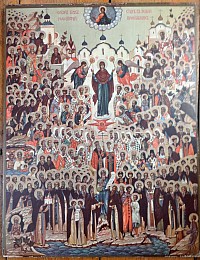 Ikon of All Saints of Russia

At the beginning of the first century, Jesus Christ was born, ministered, died and was resurrected.  In the years that followed, the Apostles spread Christ's teachings, proclaimed the good news of his saving sacrifice and resurrection, and founded many churches, united in faith. These churches included several that were later to become centres of ecclesiatical jurisdiction (patriarchates).  The church of Alexandria was founded by St. Mark, the church at Antioch by St Paul, the church at Jerusalem by Saints Peter and James, the church at Rome by Saints Peter and Paul, and the church at Constantinople by St Andrew.

Each of these independent churches developed in union with the others, and when major issues arose that could not be dealt with informally, church councils were convened.  Seven of these - the first occurring in 325 A.D., the last in 787 A.D. - were accepted as "ecumenical councils" whose decisions were regarded as binding on all.  Missionaries spread this faith, and those from Constantinople converted the Slavs and other peoples of Eastern Europe to Christianity (Bulgaria, 864; Russia, 988) translating Scripture and liturgical texts into the vernacular languages used in the various regions. The Orthodox church, therefore, is Pre-Denominational, being the tradition closest to the worship of the Early Church, and which existed before other denominations formed.

However, problems arose, not least because the Pope of Rome - regarded by the other patriarchs as "first among equals" - made claims to jurisdiction over them that the other patriarchs regarded as going far beyond his legitimate role in safeguarding the unity of the church.  Long-standing tensions came to a head in A.D.1054, in which year - from the Orthodox perspective - the Christians of the West, under the Pope of Rome, separated themselves from the universal church.  It was thought at the time that this constituted only a temporary breach in communion between the "Roman Catholics" of the West and the "Orthodox" of the East, but sadly this breach still exists today, exacerbated by what the Orthodox regard as improper additions by the Romans to the faith of the ancient, undivided church.

This problem of disunity was further exacerbated when some Western Christians, in the reformation of the sixteenth century, separated themselves from Rome.  From the Orthodox perspective, these "protestants" set up a diminished faith, in which much that constitutes the fullness of Christian belief and practice was denied.  Thus, from the Orthodox perspective, Western Christianity is not only divided, but fails in any of its ecclesial forms to manifest to the world the faith of the ancient, undivided church.  The "Eastern" churches, by contrast, remain united in faith, strongly committed to the Tradition of the early centuries, and together they constitute what is called the “Orthodox Church”, the word Orthodox literally meaning "right glory" - both in the sense of "right belief" and "right worship".  The beliefs and practices of Orthodox Christians today are essentially those of all Christians before the great division of nearly a thousand years ago.

Fortunately, we do not have to travel to the East nowadays to experience Orthodoxy. Emigrants from Eastern countries - especially Russians after the 1917 revolution - came to live in Western Europe and set up Orthodox parishes.  In time, at least some of these parishes effectively ceased to be "Russian" or "Greek", in the ethnic sense, because more and more "native" converts were made and second and third-generation immigrants could only speak the language of the country in which they live.  Thus, while some Orthodox parishes may still seem "foreign" to the natives of Western Europe, others, like ours, are determined to live and worship in a way that is not only true to Orthodoxy but also appropriate to our local situation. We work with a vision of the day when a truly "local" Orthodox Church will exist once again in these islands. (An organisation calling itself the "British Orthodox Church" does exist but it is not recognised by any other Orthodox body and cannot be regarded as part of the true Orthodox Church. Only through a slow evolution can a truly local church with its own characteristics eventually achieve the degree of maturity necessary for self-governing status.)

We local Orthodox do not, then, regard ourselves as a foreign import, but rather as the continuation of the ancient, undivided church that existed in these islands from a very early period.  For this reason, Western saints from before the mid-eleventh century - Augustine of Canterbury, David of Wales, Patrick of Ireland, Columba of Iona and many others - are regarded by us as Orthodox saints, just as much as are the saints of the countries in which Orthodoxy has an uninterrupted history.  Several ikons of these early British and Irish saints are to found on the walls of our church (The gallery is here).

Ikon of Christ, the Ruler of All, in our church's dome

The historical line from St Andrew to the current Ecumenical Patriarch

Every organisation has someone at the head to lead everyone else. Orthodox Christians can trace the people who lead the church from the Apostle St Andrew right through to the present day.  Orthodox Christians value the fact that we have a direct of people stretching from the Apostle St Andrew to the present Ecumenical Patriarch; it gives us a sense of historical continuity to someone who actually knew and talked with Jesus. A full list is here. 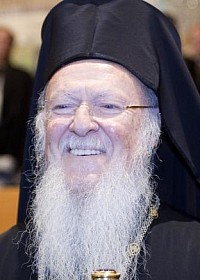 Bartholomew I (Greek: Πατριάρχης Βαρθολομαῖος Α', Patriarchis Bartholomaios A' , Turkish: Patrik I. Bartholomeos; born 29 February 1940) is the 270th and current Archbishop of Constantinople and Ecumenical Patriarch, since 2 November 1991. In the Eastern Orthodox Church, he is regarded as the primus inter pares(first among equals), and as the spiritual leader of the world's 300 million Orthodox Christians.

Born Dimitrios Arhondonis (Greek: Δημήτριος Αρχοντώνης, Dimítrios Archontónis), in the village of Agios Theodoros on the island of Imbros (later renamed Gökçeada by Turkey), after his graduation he held a position at the Patriarchal Theological Seminary of Halki, where he was ordained a priest. Later, he served as Metropolitan of Philadelphia and Chalcedon and he became a member of the Holy Synod as well as other committees, prior to his enthronement as Ecumenical Patriarch.

Bartholomew's tenure has been characterized by intra-Orthodox cooperation, inter-Christian and inter-religious dialogue, as well as by formal visits to Catholic, Orthodox and Muslim leaders seldom previously visited by an Ecumenical Patriarch. He has exchanged numerous invitations of Church and State dignitaries. His efforts to promote religious freedom and human rights, his initiatives to advance religious tolerance among the world’s religions, as well as his efforts to promote ecology and the protection of the environment, have been widely noted, and these endeavors have earned him the title "The Green Patriarch". Among his many international positions, he currently sits on the Board of World Religious Leaders for the Elijah Interfaith Institute.

The Orthodox presence in King's Lynn

On January 10th 2015, at the generous and kind invitation of Fr Adrian Ling of All Saints' church, Hillington Square, King's Lynn, the first of monthly Orthodox Holy Liturgies was held.
It was a bright dry day, but freezing wind chilled the bones to those outside. Inside, about 20 people, Orthodox and non-Orthodox filled the tiny side chapel as Fr Christopher took the service.
This was the first of what is hoped to be many such services, and we extend our grateful thanks to Fr Adrian and his congregation for their hospitality and cooperation.
In 2018 this arrangement has had to be suspended indefinitely.
.
Made with SimDif